The following paragraph is reprinted from The State magazine, April 11, 1942.  The State, with Carl Goerch, an eastern North Carolina newspaper journeyman, as publisher, printed its first issue in 1933. In 1996 the magazine's name was changed to Our State.

"[Ocracoke Island] has been a favorite summering place with large numbers of people, particularly those who lived in Washington, Greenville, New Bern, and other towns in the eastern part of the state. Hunters and fishermen have visited it from all parts of the country. It has no paved streets, no power, except that which is supplied by private plants, no sewerage or water systems, none of the many civic improvements that you will find elsewhere, but it's the grandest place in the world to visit and, if you listen to the natives, it's also the grandest place in the world to live. The houses are mostly two-story frame structures, each of them being immaculately clean and most of them well painted. Practically every house has its small garden and chickens. The entire population of the island--it's around 700--depends upon the sea for its livelihood. No, not quite all either because there are a number of men who are in Coast Guard or else have been retired with pensions. Wahab Village, originated by Stanley Wahab, local boy who made good in the big city of Baltimore, has a first-class hotel, cottages and other accommodations. It promises to be quite a development. Ocracoke lighthouse is one of the oldest on the coast." 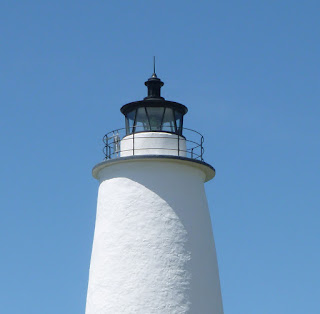 "The Coast Guard station is located on the sound side of the island. We didn't get to go there on this trip through Hyde County, but we have been there any number of times in the past. There are no people anywhere whose friendship we value more highly than we do that of those hardy, whole-souled folks at Ocracoke. If you've never been there you have missed one of the most interesting of all places within the boundaries of North Carolina...."

This month's Ocracoke Newsletter is a transcription of a letter describing the September, 1944, hurricane, its aftermath and cleanup. You can read the letter, with vintage photographs added, here: www.villagecraftsmen.com/news102117.htm.
Posted by Philip at 5:33 AM