The Providence Methodist Church, a little frame church (now attached to a newer brick edifice) in our county seat, Swan Quarter, is often called "the church moved by the hand of God."  Below is a somewhat fanciful account (from an unnamed and undated newspaper) of the 1876 hurricane that contributed to this remarkable story. 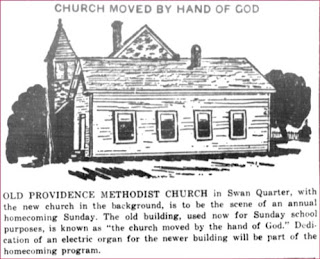 "'TWAS THE HAND OF PROVIDENCE [There is] a singular incident which occurred here several years ago. It was in the year 1876. The Methodist folk were about to build a house of worship. There was division in the membership on the question of locating the edifice. The ladies were a unit in favor of locating it on Pamlico Avenue, while the male members were united in their determination to have it on a site about 400 yards from the one desired by the ladies. The men won out and the building was in course of erection when the memorable storm of '76 swept this vicinity. The singular feature of the story is that the unfinished church structure was floated and carried by the storm to a point within twenty feet of where the ladies had desired that it be erected. The men believed this to be the work of a divine hand and it is needless to say that this house of worship remained where the storm had driven it. And to this day the men of this community let the women have their way in church matters as well as in many other respects."

This month's Ocracoke Newsletter is a transcription of a letter describing the September, 1944, hurricane, its aftermath and cleanup. You can read the letter, with vintage photographs added, here: www.villagecraftsmen.com/news102117.htm.
Posted by Philip at 5:42 AM