For nearly two decades (in the 1920s and 1930s) Dorothy Byrum Bedwell spent her childhood summers on Portsmouth Island. She recounted those idyllic years in her book Portsmouth, Island with a Soul. This is what she remembers about the Coast Guard Station:

"A team of beautiful, large, white horses is in my earliest recollections of the Coast Guard. They were useful in many ways, one of which was shore patrol especially when the tide covered the beach. On patrol, the men punched keyposts which were standing at intervals along the beach (similar to the time-clock process). I remember too the wide ramp into the expansive room that housed the surf boats and surf boat drills which were held regularly. I thought of the kitchen house which was apart from the main building, and of the tantalizing aromas of supper cooking on late afternoons when we were trudging home hunglily from a walk on the beach and an ocean swim. I recall how, during hurricanes, the Captain of the Coast Guard would invite everyone to come to the station for safe housing. During the terrible hurricane of 1944, when my mother, brothers and sisters-in-law were on the island, the Coast Guardsmen came and escorted them to the station. The tide was rising so rapidly that before they reached the station, the water was up to my mother's armpits and she said that the Coast Guardsmen on each side of her literally lifted her through some of the deeper places."

Today, the Portsmouth Coast Guard Station has been restored and outfitted with reproduction surf boats and life saving equipment. 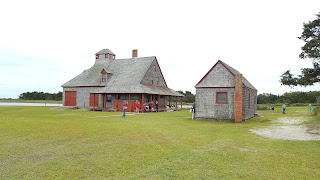 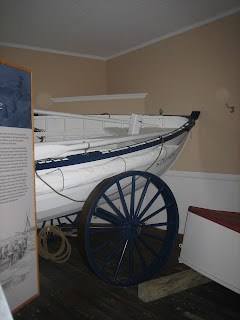 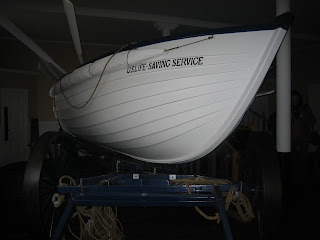 This month's Ocracoke Newsletter is a transcription of a letter describing the September, 1944, hurricane, its aftermath and cleanup. You can read the letter, with vintage photographs added, here: www.villagecraftsmen.com/news102117.htm.
Posted by Philip at 6:14 AM