Fishermen and beachcombers walking along the oceanfront at Pea Island beach on Hatteras Island may notice a large rusty cylindrical object sticking out of the surf about one hundred yards offshore. 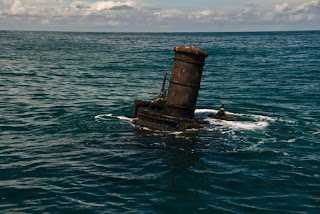 Although locals refer to this object as a "boiler," Kevin Duffus, in his book Shipwrecks of the Outer Banks, identifies it as a steam cylinder (the part of a steam engine that contains the piston).

This cylinder belongs to a sunken Federal Transport ship, the Oriental. The 210' long Oriental was built in 1861, and used during the Civil War. During its second mission (carrying mail to Federal soldiers, and transporting missionaries and abolitionists to minister to freed slaves), the vessel sank during a severe storm on May 16, 1862.

The Oriental is also sometimes known as the "Stovepipe Hat Wreck." To read about the colorful legend of when the Hatteras beach was littered with stovepipe hats click here. 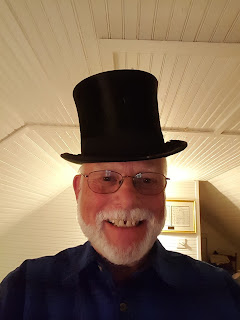 This month's Ocracoke Newsletter is my analysis of a sentence penned by surveyor Jonathan Price in 1795. The sentence reads, "Occacock was heretofore, and still retains the name of, an island. It is now a peninsula; a heap of sand having gradually filled up the space which divided it from the bank."  You can read my analysis here: https://www.villagecraftsmen.com/description-occacock-1795/.