Starfish are not rare; but nor are they common on our beaches. This Royal Starfish (Astropecten articulatus), probably named for its bright purple color, washed up on the beach this past summer. 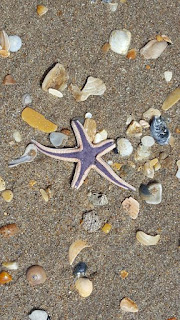 The royal starfish, like all starfish, has no brain. They also have no blood. Instead they have a water vascular system. The starfish's primitive eyes are at the tip of its arms.

Starfish can reproduce by physical birth or by giving up an arm to morph into another starfish.

The Royal Starfish feeds by wrapping its arms around mollusks and swallowing them whole.

This month's Ocracoke Newsletter is my analysis of a sentence penned by surveyor Jonathan Price in 1795. The sentence reads, "Occacock was heretofore, and still retains the name of, an island. It is now a peninsula; a heap of sand having gradually filled up the space which divided it from the bank."  You can read my analysis here: https://www.villagecraftsmen.com/description-occacock-1795/.
Posted by Philip at 5:52 AM