In her 1984 book, Portsmouth, Island with a Soul, Dorothy Byrum Bedwell writes about the serenity of Portsmouth in the 1930s.

"The simplicity and tranquility of the island were evidenced by the sounds that were heard. The roar of the ocean swelled and diminished with the winds and tides, sometimes hardly audible, sometimes thundering. Always there were the shrill cries of seagulls in flight heard above the piping of smaller birds that flitted from bush to tree. The monotonous humming of insects rose and fell in regulated crescendo. Occasionally the lowing of cattle could be lheard in the distance. The only man-made sound was the motor boat's drone, intermittently drifting in with the breeze. Portsmouth had an 'at peace with the world' atmosphere, hushed and serene." (page 16)

Today Portsmouth is at least as quiet, probably more so since cattle no longer graze there, and no one lives in the once bustling village.

Click on the photo below for more information about Portsmouth Island. 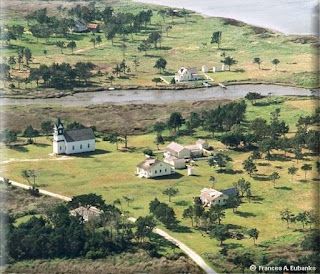 This month's Ocracoke Newsletter is a transcription of a letter describing the September, 1944, hurricane, its aftermath and cleanup. You can read the letter, with vintage photographs added, here: www.villagecraftsmen.com/news102117.htm.