Ocracokers were shocked and saddened Tuesday morning to learn that two-and-a-half-year-old Charlotte, daughter of Marcy Brenner & Lou Castro had died in her sleep. Many of our readers know Charlotte and her parents who play music together as "Coyote." In addition, Marcy and Lou are both part of the band "Molasses Creek." 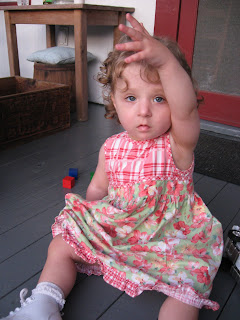 Any death in our community, especially the death of a child, affects everyone. Charlotte was frequently in attendance at performances and informal gatherings where she'd dance and clap along with the music. Charlotte loved other people, pre-school, animals, music, books, dancing, and drawing.

Joyce Reynolds looked after her as her own grandchild, but Charlotte was also often seen sitting on various peoples' laps listening to her mama and papa as they picked their instruments and sang to entertain us all.

The entire Ocracoke community is in mourning for a sweet little girl that captured everyone's hearts.

A service is scheduled for Friday morning at 11 o'clock in the Ocracoke United Methodist Church. Marcy and Lou have asked, that in lieu of flowers, donations be sent to Ocracoke Child Care, PO Box 284, Ocracoke, NC 27960.
Posted by Philip at 12:29 AM