This year, at the Society's fall membership meeting on November 10, the Old House Award was presented to Trudy and Wayne Clark for their recent historic rehabilitation of the Felix & Sue Fleig House on Live Oak Road. 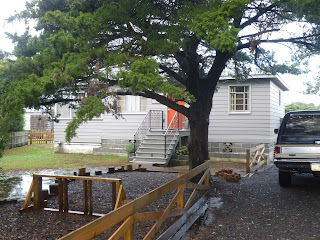 Although this modest, hip-roofed house with a corner recessed porch was built in the 1950s, a century later than many other structures in the Historic District, it is representative of island homes built shortly before the significant changes following the era of modern tourism ushered in by the introduction of state-operated ferries in 1957 and the paving of NC Highway 12.

The restoration project was carried out by island resident, Tom Pahl, of Landmark Building & Design, according to North Carolina State Preservation Standards.

Congratulations to Trudy and Wayne Clark, and to Tom Pahl, for their commitment to historic preservation...and to a fine job of rehabilitation.

Our latest Ocracoke Newsletter is the story of the Wreck of the Banana Boat. You can read it here: www.villagecraftsmen.com/news102115.htm.
Posted by Philip at 5:49 AM