Below is a photo taken by National Park Service ranger, Henry Raup, sometime between 1974 and 1978. The house on the left, built ca. 1940, is still standing. 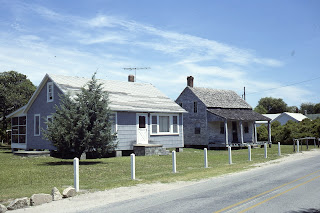 The house on the right, a traditional island "story and a jump," was built in the early 20th century by Andrew Spencer. The last resident was his cousin, Caswell Spencer (1886-1905). The house stood until 1989 when it was demolished. Descendants of the Spencers continue to live in the house on the left.

Can any of our readers identify where this picture was taken?

Our latest Ocracoke Newsletter is the story of Capt. Horatio Williams and his schooner, the Paragon. You can read the story here: www.villagecraftsmen.com/news112115.htm.
Posted by Philip at 6:15 AM