I wonder how many readers remember my father, Lawton Howard (1911-2002). He had an impish sense of humor that endeared him to everyone he met. If you don't remember Lawton you can read about him here: http://www.villagecraftsmen.com/news011805.htm.

This following photo shows his family in Spring, 1912. Lawton is the baby in his mother's arms. 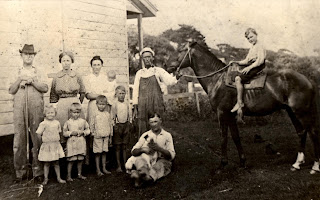 The photo was taken by the corner of my house on Lawton Lane.

Sitting, in front with dog: Marvin Howard (my father's brother).

This month's Ocracoke Newsletter is about earthquakes that have affected Ocracoke and the Outer Banks. You can read the newsletter here: http://www.villagecraftsmen.com/news092116.htm.
Posted by Philip at 5:32 AM