I have discovered more than fifty different spellings for Ocracoke in various historical documents and maps. The name is clearly of Native American origin, probably from "Wingandacon" which became "Wococon" or "Wokokon" on early maps. Some researchers believe the first Europeans believed the Indians were telling them the name of the place, when they were actually saying, "You wear good clothes."

Kitty Hawk is another Outer Banks village with an interesting name. Many legends have developed about where the name came from. Dragonflies, which are common on the Banks, are often called skeeter hawks, and some have suggested this as the origin of the name. Huak (probably an imitation of the sound made by a goose) is also an Indian word. It refers to this common waterfowl in eastern North Carolina. Could this be where Kitty Hawk derives its name?

More likely, Kitty Hawk is an Anglicanization of the Algonquian word Chickehauk, an Indian settlement located on James Wimble's 1738 Map of North Carolina: 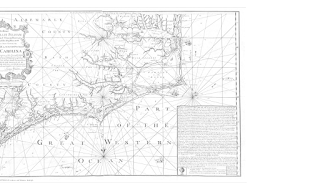 The detail below shows "Chickehauk" just to the left of "Three sand hills." 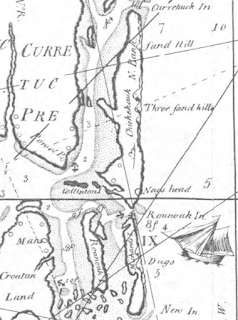 Our latest Ocracoke Newsletter is about earthquakes that have affected Ocracoke and the Outer Banks. You can read the newsletter here: http://www.villagecraftsmen.com/news092116.htm.
.
Posted by Philip at 6:19 AM