Carl Fridolf Ahman was born in Goran, Scotland, in 1887. He later moved to Glasgow. About 1900 he changed his name to Charles Freemont Ahman, and immigrated to the United States soon thereafter.  In 1912 he married Esther Thompson, a native of Belfast, Ireland.

Charlie Ahman worked as a carpenter and seaman, but quit his life at sea sometime in the mid-20th century. He spent time in Saugus, MA, New York City and Norfolk, Virginia, and eventually found his way to Ocracoke Island.

Local legend has it that Charlie purchased a house in Norfolk and had it delivered to Ocracoke on a barge. It was unloaded in Silver Lake Harbor, then rolled on logs to its home site. Charlie bought an adult tricycle and was happy visiting neighbors and pursuing his interest in painting. When artists' canvas boards were unavailable Charlie painted on anything he could get his hands on...wooden shingles, Formica, even paper plates.

Charlie was gregarious, and enjoyed being a member of the Ocracoke Methodist Church, and participated actively in the Ocracoke Civic Club. Charlie died suddenly in 1975 while in Manteo, North Carolina. Esther had died in 1966. They are both buried in the Community Cemetery on Ocracoke Island.

Below are photos of a few of Charlie's paintings. You can view more of his artwork at the Ocracoke Preservation Society's Charlie Ahman Online Exhibit. 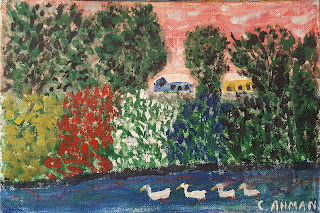 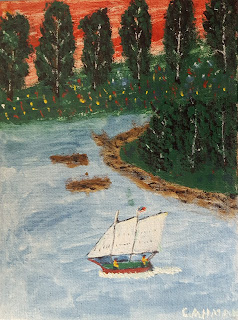 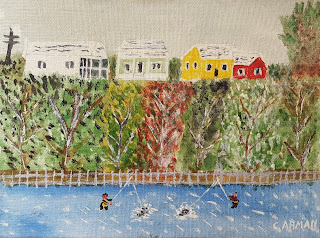 This month's Ocracoke Newsletter is a brief history of Howard's Pub. You can read it here: https://www.villagecraftsmen.com/news082117.htm.
Posted by Philip at 5:38 AM