One of Ocracoke's Iron Men

"Ocracoke Sees the Passing of One of its Iron Men as Capt. Tom Gaskins Departs.

"Captain Tom Gaskins sailed today [July 5, 1947] for the Islands of the Blessed and tonight the ghost skippers of the Seven Seas gathered to welcome him into their celestial harbor.

"The long shore-leave that his age has imposed on him came to an end at noon when his heart stopped beating and he crumpled to the ground of the oak-shaded yard of his home where he had lived alone for a dozen years or more.

"Only an hour before, the 93-year-old one-time skipper of schooners and clipper ships had been sitting down on the quay spinning yarns of a bygone era when sailing vessels with two and three raking masts, their topgallant and royal sails furled, stood in the roadstead off Ocracoke.... 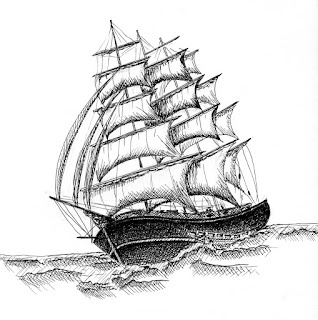 "Born on Ocracoke island, Dec. 19, 1854, Captain Tom took to the sea when he had barely reached his 'teens.

"For almost 40 years he sailed up and down the Atlantic Coast.... The two ships of his life were the Annie Wahab and the Paragon, both two-masted schooners....

"So perhaps he has found the Annie Wahab up there in the Island of the Blessed and is sitting around signing on a crew to take her out of that stormless sea where he can let her canvass billow full and white."

This month's Ocracoke Newsletter is a contemporary account of the December 24, 1899 wreck of the Steamship Ariosto. You can read the Newsletter here: http://www.villagecraftsmen.com/news072117.htm.
Posted by Philip at 5:32 AM