According to http://nationaleclipse.com, "Between 1776 and 1918, 16 total solar eclipses crossed over what was or would eventually become U.S. soil."

The web site goes on to explain that, "[t]he total eclipse of June 24, 1778, was the first of its kind for the newly independent, but still at war, United States of America. 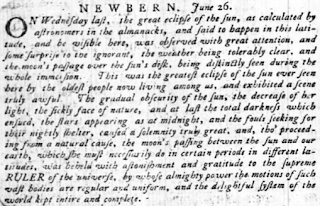 "Newbern, June 26. On Wednesday last, the great eclipse of the sun, as calculated by astronomers in the almanacks, and said to happen in this latitude, and be visible here, was observed with great attention, and some surprise to the ignorant, the weather being tolerably clear, and the moon’s passage over the sun’s disk, being distinctly seen during the whole iimmersion. This was the greatest eclipse of the sun ever seen here by the oldest people now living among us, and exhibited a scene truly awful. The gradual obscurity of the sun, the decrease of her light, the fickly face of nature, and at last the total darkness which ensued, the stars appearing as at midnight, and the fouls seeking for their nightly shelter, caused a solemnity truly great, and, tho’ proceeding from a natural cause, the moon’s passing between the sun and our earth, which she must necessarily do in certain periods in different latitudes, was beheld with astonishment and gratitude to the supreme RULER of the universe, by whose almighty power the motions of such vast bodies are regular and uniform, and the delightful system of the world kept intire and complete."

According to nationaleclipse.com, "The eclipse first entered the continent in Spanish-, French-, and British-controlled land and then slid out into the Atlantic Ocean through Georgia, South Carolina, North Carolina, Virginia, and Maryland. New Bern, North Carolina, was close to the southern edge of the eclipse path...."

To see photos of the 2017 eclipse on Ocracoke, take a look at our Facebook page later today.

This month's Ocracoke Newsletter is a contemporary account of the December 24, 1899 wreck of the Steamship Ariosto. You can read the Newsletter here: http://www.villagecraftsmen.com/news072117.htm.
Posted by Philip at 6:11 AM