It is fig season again, and many islanders' kitchens are filled with figs boiling on their stoves to make preserves.

Fred Mallison, in his book To Ocracoke! relates a tall tale he overheard from Captain Ike O'Neal. Mallison was a young boy visiting the island in the 1930s, and he and friends enjoyed hanging around the docks listening to the old sailors. One day he heard Cap'n Ike tell "about the time he was becalmed at sea for a week. Their food gave out, he said, and he and his crew lived on two pound figs and a case of condensed milk. That was why he did not eat figs any more. I began to fit out a sea story from Cap'n Ike's tale. I imagined Captain Ike confronting a half mutinous crew, as he carved equal slices from a pound fig as big as a watermelon. And with a cutlass. Captain Bligh could not have done it better." 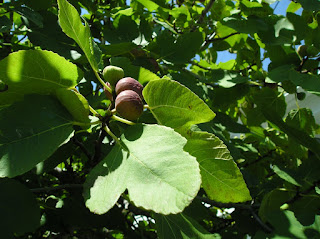 A pound fig is so called because of its large size (sometimes as big as an orange, but not a watermelon!). It has a purplish color, and smells of cinnamon. It is one of at least nine cultivars grown on Ocraocke Island.

This month's Ocracoke Newsletter is a contemporary account of the December 24, 1899 wreck of the Steamship Ariosto. You can read the Newsletter here: http://www.villagecraftsmen.com/news072117.htm.
Posted by Philip at 5:39 AM