Update: As of 8 pm yesterday, the timeframe for restoration of electric power to Ocracoke Island from this point forward was 2-3 days. This includes the time required for testing after all construction is complete and before transmission service can begin.

Now for a look back into history for another Bonner bridge story, this one from 1990:

Early in the morning of October 26, 1990, 90 mph winds drove the hopper dredge, Northerly Isle, into the Herbert C. Bonner bridge, destroying 370' of the structure, and severing electric and telephone wires to Hatteras and Ocracoke Islands. 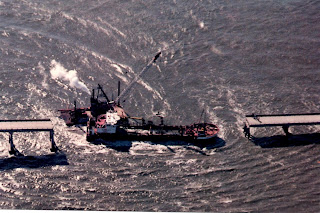 It soon dawned on residents and visitors on Hatteras that the only way to the mainland was now by way of two ferries, first across Hatteras Inlet, then from Ocracoke to either Cedar Island or Swan Quarter. Three days after the bridge collapsed there were 275 cars in line for the two ferries from Ocracoke to the mainland. The line stretched through the village, and down NC12 towards the NPS campground. Many people had to sleep in their cars overnight.

When the extent of the problem became obvious Ocracoke islanders began taking sandwiches, soft drinks, and other essentials to the stranded motorists. Families with babies and the elderly were offered free motel rooms.

Although power was restored four days later, it was months before the bridge was repaired. In the meanwhile the state of North Carolina made arrangements to run emergency ferries across Oregon Inlet.

This month's Ocracoke Newsletter is a contemporary account of the December 24, 1899 wreck of the Steamship Ariosto. You can read the Newsletter here: http://www.villagecraftsmen.com/news072117.htm.
Posted by Philip at 5:49 AM