According to Surfline.com, "In 2007, the Global Surf Network was born to bring the surf film and the independent surf filmmakers to venues where movie experiences can be amplified. Also, the organization founded by Rob [Beedie] believes there's a social side in surf films for stoking young and oldies.

"The Global Surf Network is putting up several surf film festivals that promote the sport and boost new filmmaking careers."

According to The Molasses Creek Journal, "In August [August 15, 2008], [Deepwater] theater was the venue for the 1st Annual Ocracoke Island Surf Film Festival, which raised over $2400 for OYC [Ocracoke Youth Center]. 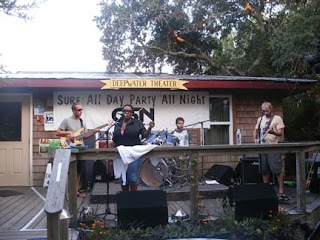 "Sponsored by the Global Surf Network, the film fest included several different documentaries and short films, and one feature movie (shown on the sort-of-big screen inside), interspersed with live musical performances (on the theater’s front porch.)" 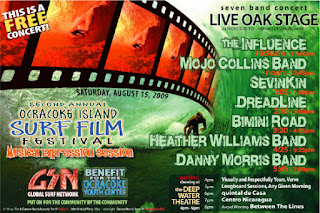 To my knowledge that was Ocracoke's first and last Surf Film Festival.

For surfing enthusiasts: check out these surf film festivals from around the world; and here is a list of the best surfing movies. Enjoy!

This month's Ocracoke Newsletter is a contemporary account of the December 24, 1899 wreck of the Steamship Ariosto. You can read the Newsletter here: http://www.villagecraftsmen.com/news072117.htm.
Posted by Philip at 5:52 AM