Several days ago I mentioned my gypsy wagon...and received several comments asking about its provenance.

In the late 1960s I worked on Rocky Boy's Indian Reservation in north central Montana. Rocky Boy's is a small reservation of Chippewa and Cree Indians. While there my wife and I were inspired to make an 18' Cree tipi. The tipi became the first home of the Village Craftsmen when we returned east and settled on Ocracoke, my ancestral home (it was the 70s, after all!).

On a subsequent visit to Montana in the early 1970s I met a family who were living in a sheep herder's wagon. I have always been interested in out-of-the-ordinary people and quirky lifestyles. The wagon so intrigued me that I decided to build one of my own (I needed a challenge since I already had a tipi!). However, I was also influenced by my mother's Hungarian heritage, and stories of gypsies.

In the mid 1980s I began construction of my gypsy wagon. It is built on the chassis of a Ford pickup truck. (You should have seen me carting fenders, a cargo bed, seats, and other parts to the dump.) I designed the superstructure myself, based on other vardos (the gypsy word for wagon) and photos I had access to.

Inside, the wagon was fitted out as a camper. It originally had a wood cook stove, satin curtains, and elaborate decorations. The fire engine red outside sported brass lanterns, etched glass windows, decorative iron braces, and carved vertical strips with bright yellow pin striping.

It was quite impressive, though it was too heavy and unwieldy to serve as a practical camping vehicle. 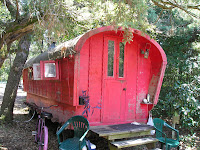 After more than a quarter of a century the gypsy wagon is showing its age. It was repainted once, and the iron braces & lanterns were not reattached. Nor were the yellow decorations repainted. Some of the wood has begun to deteriorate.

The gypsy wagon still serves as an occasional spare bedroom, and gathering place for interesting people with quirky lifestyles. I will continue to enjoy it as long as it survives the depredations of weather and age. It rests behind the Village Craftsmen.

Our latest Ocracoke Newsletter is Lou Ann's story of the Night Blooming Cereus Cactus. You can read it here: http://www.villagecraftsmen.com/news072111.htm.
Posted by Philip at 5:48 AM