Oh what a beautiful morning! The sky is bright and sunny -- temperature in the mid 70s. It reminds me of Sept. 13, 1944. Aycock Brown had gotten word that a powerful storm was moving toward Ocracoke (this was in the days long before anyone but the military was tracking hurricanes). Aycock posted signs around the village, trying to warn people, but hardly anyone believed him; the weather was simply too beautiful.

However, Stacy Howard, who had heart problems, and whose doctor warned him not to get overly-stressed, decided to heed Aycock's predictions "just in case," so he wouldn't worry so much when the storm hit. In those days most skiffs were simply tied to stakes in the harbor. By the end of the day Stacy had so many lines running from his boat to other stakes and anchors that the other men said it looked like a huge spider web.
The "44 Hurricane" hit Ocracoke with a vengeance! Winds were over 100 miles an hour, many houses were flooded by the rising tide, and boats were scattered all over the village. Several ended up in front of the Island Inn. 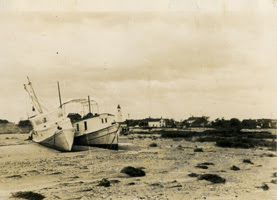 The bow of one was poking in the door of a house. 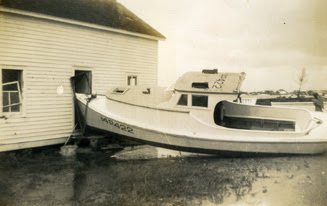 But Stacy Howard's skiff was right where he'd tied her up.

From that time on, whenever anyone saw Stacy tying his boat up for a hurricane, everyone took him seriously and began their own preparations.

It is different today. It is bright and sunny, but everyone knows that a storm is on its way. So everyone is making preparations. I'll keep you posted.
Posted by Philip at 8:13 AM